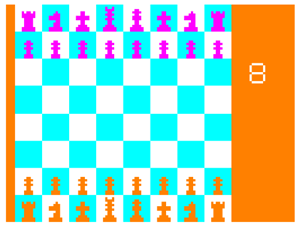 Microchess, by Peter R. Jennings, was originally a microcomputer chess program for the MOS Technology KIM-1 microcomputer, first released on December 18, 1976. Microchess, as small as it was in terms of program size, could still play passable chess on the KIM-1 with its 6502 microprocessor, 1 kilobyte of memory, simple hex keyboard, and seven-segment display.

Selling it at a price of $10 US dollars, Jennings refused to sell the rights of the program to Chuck Peddle (president of MOS Technology) for $1000. It was the first microcomputer software package to sell 10,000 copies, almost exclusively on cassette tape. Jennings founded Personal Software to publish Microchess to the growing microcomputer market. Money made from Microchess and other software projects allowed Jennings, together with Dan Fylstra, to launch VisiCalc and then create the VisiCorp company. VisiCalc would be its greatest success.

Microchess was later expanded into a more fully featured program with graphics for the TRS-80, Apple II, Commodore PET and Atari 400/800 computers. It was also licensed to Novag for its dedicated Chess Champion Mk II in 1979.

Click here to read the manual for this program.